20 years of hectic daze . . . that’s what it’s been for Paul & Young Ron and their legion of fans in South Florida.

To recognize and celebrate the milestone, Boca Raton magazine’s Marie Speed asked the popular radio show hosts the questions and the guys, as usual, the guys weren’t at a loss for words:

While it would be overstating it to say quality relationships are “everything” in today’s business world, it isn’t a reach to say they are more important than ever.  Connecting people, “bringing something to the table,” and moving forward agendas is a smart growth strategy, in addition to being a nice thing to do.

Rochelle Broder-Singer, a talented editor/writer and correspondent for Florida Trend, and Fort Lauderdale-based investment banker Craig Farlie are friends of Impact Players.  Understanding what would benefit each of them made this an easy strategic introduction to make (see the results below) and all three sides are better for the connection to each other.

What relationships can you create or enhance in your business? 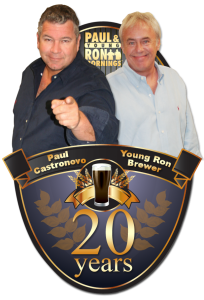 Considering its prominent place in our daily lives, it’s remarkable that so many people know so little about FM radio.

It’s a constant companion — at home, work and in the car, as the stations are quick to point out — and their morning shows hold a place alongside that first cup of coffee as workday staples.  Yet it is still the 1970s-era sitcom WKRP in Cincinnati that passes as inside information for many of its most loyal listeners.

Truth be told, many in radio do nomadically move from market to market in search of bigger and better situations.  Meanwhile, station executives have notoriously quick trigger fingers, always in search of talent that will produce higher ratings and the advertising dollars that come with them.  Which makes the story of Paul Castronovo and “Young” Ron Brewer even more remarkable.  Twenty years after its debut on the gone-but-not-forgotten WSHE, the “Paul & Young Ron Show” is more popular than ever.  Heard weekday mornings on BIG 105.9 FM (Miami/Fort Lauderdale), The Gater 98.7 FM (Palm Beach County and the Treasure Coast), Sun 103.1 (Key Largo)and 99.5 FM (Key West), the “morning show for all of South Florida” is a consistent ratings leader that has not only survived but remained relevant to a new generation of listeners.

The year was 1989 and morning radio in South Florida was going through a transition period.  Neil Rogers had left Zeta-4 (WZTA-FM) for the AM dial, Howard Stern had not yet arrived, and the market had no morning radio stars.  Paul Castronovo, an out-of-work former South Florida DJ trying to escape Birmingham, Alabama, wanted to come home.

“I desperately wanted to do mornings on ‘SHE,’ so I pestered the program director incessantly,” says Castronovo.  “When he finally met with me, he decided that if his midday guy and I clicked, there could be an interesting morning show in the making.”

The “midday guy” was Parkland resident “Young” Ron Brewer, a fellow DJ who had also done news and sports in stops prior to South Florida.

“So, a group of us ended up going out for dinner and drinks,” Castronovo continues, leading the conversation much as he does on-air, “and it wasn’t long before Ron and I had the whole room cracking up.”

What served as a de-facto audition resulted in the two becoming a morning team.  Castronovo, the DJ, would play records, Brewer would be the newsman, and the music would remain the focus.  Even the station’s tagline, “she’s only rock & roll,” reinforced the pecking order.

“Paul and I would play a few songs, crack on each other a bit, do an occasional interview and then quickly get back into the music,” says Brewer of those days in the early ‘90s.  “The owner of the radio station had a rule: if we talked for more than a minute, we were in trouble.”

“I can’t tell you how many times we were called into the executive offices because we ‘ran at the mouth’,” adds Castronovo.

Five years into their run at WSHE the duo had had enough of the restrictions placed on them.  With an expiring contract, a following in the market, and leverage for the first time in either of their careers, the “Paul and Young Ron Show” headed down the dial to a new home at 94.9 Zeta.  “It was the best move we could have made,” says Brewer.  “We were the anchor program at an alternative rock station at a time that was the industry’s hottest format.  The station was successful, our morning antics were popular with listeners, and management promoted the hell out of us at major concerts and events.  We had ‘made it’ in the market we most wanted to work in.” 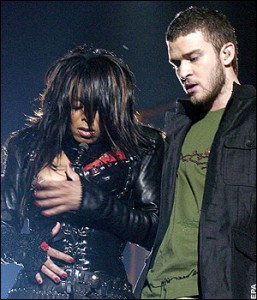 A funny thing happened on the way to Paul and Ron’s happily ever after – America saw Janet Jackson’s nipple at halftime of the Super Bowl and the resulting public outcry made radio station programmers more conservative.

“The Stern firing left a huge gap on BIG, which played classic rock, and still does,” Castronovo said.  “Both Ron and I grew up listening to that format, and the alternative rock scene was drying up, so we jumped at the chance to move.”

Within weeks, station research showed that 70% of the Zeta audience had moved up the dial with Paul and Young Ron.  Many of the former Stern loyalists apparently liked what they heard as well, since today the show is the top-rated in its targeted demographic, English-speaking men 18 and older.  It is among the top-rated programs for all persons 25-54, in both the Miami/Fort Lauderdale and West Palm Beach markets.

“To come into a situation where many other syndicated morning shows have failed and accomplish what they have is amazing,” said Dave Denver, operations director for Clear Channel Palm Beach and The Gater 98.7.  “They’ve brought a younger, broader audience to the station, men and women, and we’re proud to have them.” 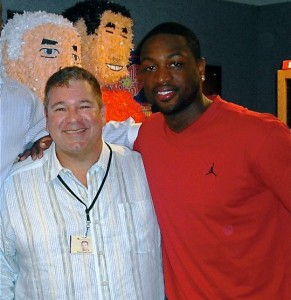 The show (www.paulandyoungron.com) is known for A-list celebrity guests — Johnny Depp, Matt Damon, Kevin James, Jeff Garlin, and Dwyane Wade (pictured, right), to name just a few — plus ridiculous stories from the sometimes hard to believe lives of Castronovo, Brewer, producer “Toast,” and stunt guy OMG Mike.  It is consistently fresh and original, without resorting to Stern’s shock or the all-too cliché “morning zoo” format.  They are South Florida originals, discussing what locals talk about and involving their audience every step of the way.

While the laughs come easily each day, the show does have a serious side, and it is on display each holiday season when Paul & Young Ron stage a series of fundraisers to feed the hungry.  In 2009, their 15th annual food drive generated nearly 1.5 million pounds of food for Feeding South Florida (formerly the Daily Bread Food Bank).

”We’re happy to do it, and thankful to have a real impact for people in this community,” Castronovo explains.  “After all, this is home.”

It’s a home that has been good to Paul and Young Ron, on-air and off, since they began traveling up and down the dial twenty years ago without ever leaving South Florida.

(This article, by Stu Opperman, was originally a cover story for Lifestyle Magazines). 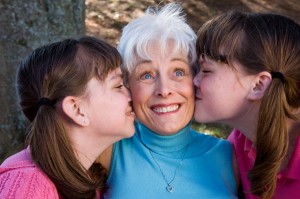 We’re annoyed by magazine companies that enlist school kids to shake down Grandma for a subscription she doesn’t want/need.

That’s your business model, exploiting kids (win a prize for your school!) and families to provide a cheap sales force?

He was handcuffed, blindfolded, forced to wear a ghilly suit, and taken to an undisclosed location . . . then OMG Mike’s day got worse. 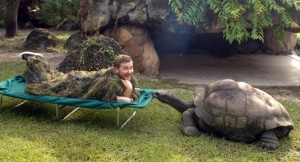 As punishment for losing an on-air bet that initially cost him his job, Paul & Young Ron’s sidekick will live for more than two days with giant Galapagos turtles during mating season at Zoo Miami (formerly Miami MetroZoo).  OMG will eat, sleep, and clean up after the 500 lb. animals until Saturday morning, all while wearing a heavy camouflage suit that can be more than 100 degrees on the inside.

Watch all the action as it happens (no pun intended) here then listen throughout South Florida to our clients on the “Paul & Young Ron Show” mornings 6:00-10:00.

Edson Barboza Jr.  is a mixed martial artist who fights for The Armory and is represented by MMA Profit Advisor(disclosure: Stu Opperman of Impact Players is a partner there).  Junior’s debut in the UFC (the NFL of the sport, for those who aren’t fans) is one of the most anticipated in recent memory.  While the Brazilian is a veteran of many muay thai and MMA fights, he will enter the octagon for the first time at UFC 123 November 20 against Darren Elkins.

MMAjunkie.com is the latest to offer a closer look (click to read article) at the man many expect to be the future of the lightweight division. 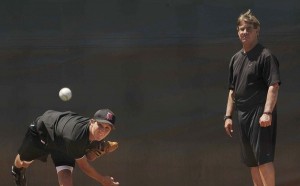 The Make-A-Wish Foundation of Southern Florida and “Wish Kid” David Thompson were recently featured during a Florida Marlins broadcast on Fox Sports Net.  David is a promising high school pitcher whose baseball career has been derailed by common variable immune deficiency, a genetic condition which results in David being very prone to sickness, infection, and injury.

David’s wish was to travel to Los Angeles to have a biomechanical evaluation of his pitching motion by former major league pitcher and current USC coach Tom House.  He shared the power of his wish with Allison Williams in this video.

(Bonus points to those who knew that it was Tom House who caught Hank Aaron’s 715th home run ball in the Atlanta Braves bullpen). 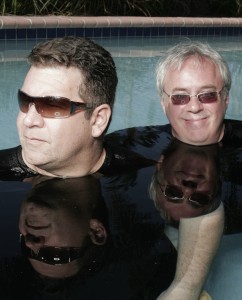 The “Paul & Young Ron Show” has been entertaining audiences in South Florida for two decades, longevity almost unheard of in radio today.  The program is heard each morning from the Treasure Coast to Key West.

CBS-4’s Lisa Petrillo recently went in the studio with hosts Paul Castronovo and “Young” Ron Brewer for a behind-the-mike look at the guys who fuel morning drive.

I am very fortunate to have a longterm professional and personal connection to the Make-A-Wish Foundation of Southern Florida.  I have been their public relations representative for more than a decade, believe in their mission, and enjoy significant relationships with the many people who help create magic for local children who have life-threatening medical conditions.

Please consider this a formal invitation to join us, not only to grant the wishes of sick kids, but to affiliate for your own benefit with one of the world’s most loved and widely-known nonprofit organizations.  While becoming a donor, volunteer, or referring a potential wish child are the traditional ways to get involved, they are not the only opportunities.  Restaurants can host Make-A-Wish events, organizations can request guest speakers, businesses and their employees may want to reinvest in their communities through fundraising or by providing in-kind services . . . the possibilities are only constrained by the limits of our creativity.

By the way, this is not a one-way street.  The foundation has nearly 20,000 opt-in e-mail subscribers, more that 10,000 Facebook friends, almost a thousand followers on Twitter, and a popular YouTube channel that can be utilized to promote partnerships.  They have a history of mobilizing their army of supporters to attend events, virally spread information through social media/networks, and otherwise support like-minded people who want to bring happiness to children and families coping with medical issues.

Let’s discuss how you and/or your business might join the effort.  Are you interested in a strategic introduction?